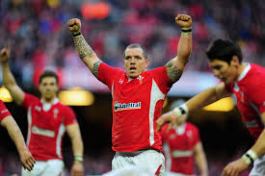 The RBS 6Nations Championship is heading towards a climax, and while both sides will naturally want to win, this is as much a pointer to see where each nation is going into the 2015 World Cup.

Wales are almost where they want and expect to be. Warren Gatland’s side have been together for some time. England are quickly emerging as a major force and what some units lack in experience, they make up for in depth and quality.

Many see Wales as contenders for the World Cup semi-final, yet they failed to convince against Italy and were completely out-classed by Ireland. They are rushing back Jonathan Davies and will also be boosted by fellow British and Irish Lion Alun Wyn Jones.

Wales won last year’s tussle 30-3 in Cardiff. At present, they are the best team in Europe – since the last World cup they have won both Six Nations titles that have been played with a record of 11 wins and only two losses. England are still a year away from peaking, which is exactly where this young team expects to be.

We have our doubts about referee Romain Poite, who virtually handed New Zealand a 29-15 victory over South Africa in Auckland last September, but hopefully he won’t get in the way of what should be a Twickenham thriller.

For our money, England (4/7) have a vastly superior pack and will be fuelled by last season’s humiliating defeat which robbed them of the Grand Slam.

Wales’ crushing victory over France owed much to the woeful play of Philippe Saint-Andre’s team, yet the bounce-back from the crushing defeat in Dublin was nonetheless impressive.

Italy will be without influential captain Sergio Parisse because of a leg injury and he will be replaced by Trevisio’s Robert Barbieri, with veteran lock Marco Bortolami leading the winless Italians.

Ireland make one change for the side beaten by England: in comes back-row Iain Henderson as a replacement for the injured Peter O’Mahoney.

Italy picked up a first ever Championship win over Ireland 12 months ago but don’t expect them to double up. Ireland are considered 1/33 favourites, with the Italians available at 10/1.

With Brian O’Driscoll winning a world record 140th Test cap and playing his final game for Ireland on home soil, look for his side to send him off in style.

Italy gave Wales all they could handle on opening weekend, but are a far different proposition without Parisse and we take the hosts to cover a large handicap.

France come into this game on the back of a humiliating 27-6 loss to Wales – which could have been far worse – while Scotland are buoyed by their 21-20 success in Rome.

Yet even after their dreadful loss, France are still in the mix for the 6 Nations title. Coach Philippe Saint-Andre, with his job in doubt, has turned over almost half the side, with three new loose forwards, three new backs and a third-choice hooker.

Scotland make four changes, including bringing in tight-head prop Geoff Cross for his first start in a year. Skipper Kelly Brown is recalled, as is David Denton.

Scotland will play with passion at Murrayfield and it is anyone’s guess which France side turns up. The guess is the experienced French duo of captain Pascal Pape and tighthead Nicolas Mas will get the edge up front and that is one of the reasons why they are considered 3/10 favourites.

Scotland can be backed at 9/10 in receipt of 7.5 points, because they have the capability to win this.

Visit myclubbetting.com to find out how your club can receive a FREE revenue stream and FREE kit and equipment.